at The Odyssey Theatre

Written 100 years ago, MISALLIANCE is about a young woman who’s sick of her constrained life as a lady in high society England. She’s engaged to a smart but soppy Aristocrat, whom no one in her family likes, and she prays for something exciting to happen. Sure enough, one day a plane crashes on her family’s estate and out comes a dashing aviator whom she falls in love with and chases round the property. Out also comes a female acrobat daredevil, whom all the men fall in love with. By the end of the day, there have been eight marriage proposals. Which couples will be happy, and which are Misalliances?

STAGESCENELA.COM‘S
BEST OF 2008-2009 AWARDS
Highest Honors:
Set Designer of the Year
STEPHEN GIFFORD
For his work on MISALLIANCE
(and other shows)
StageSceneLA.com 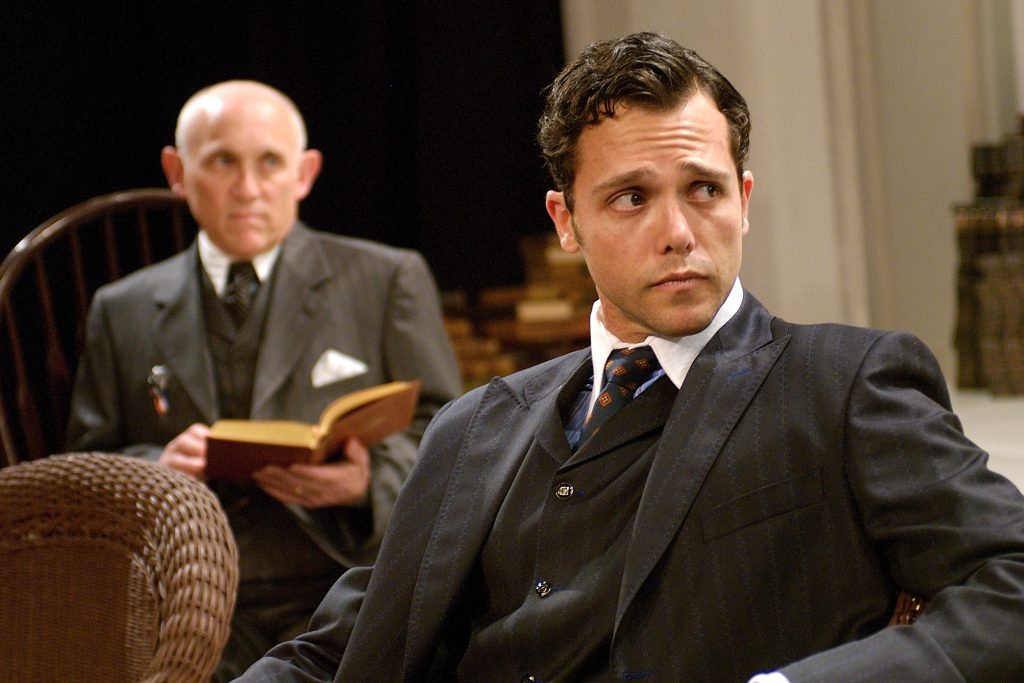 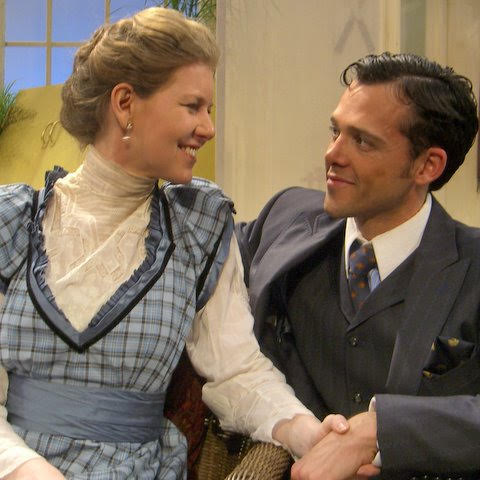 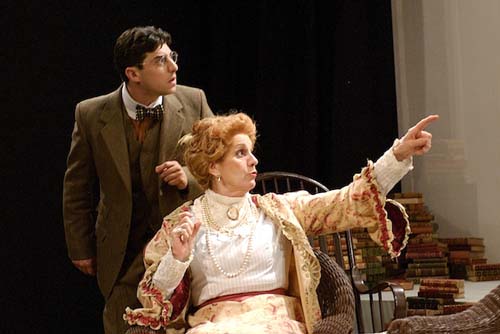 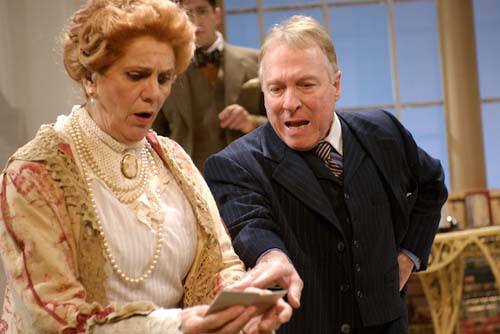 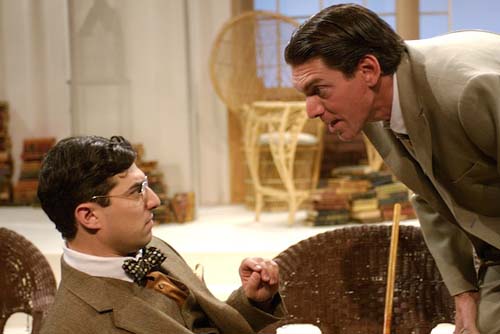 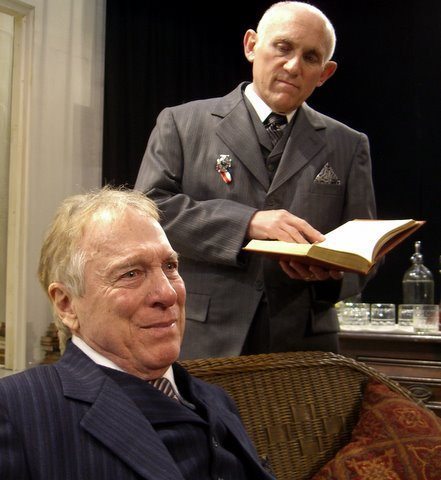 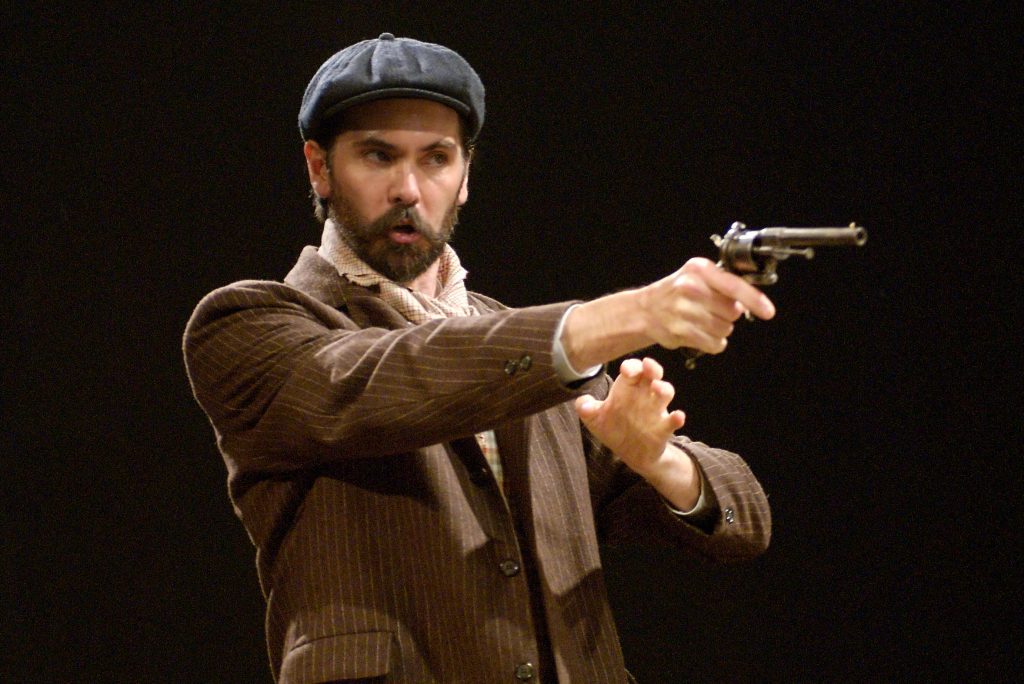 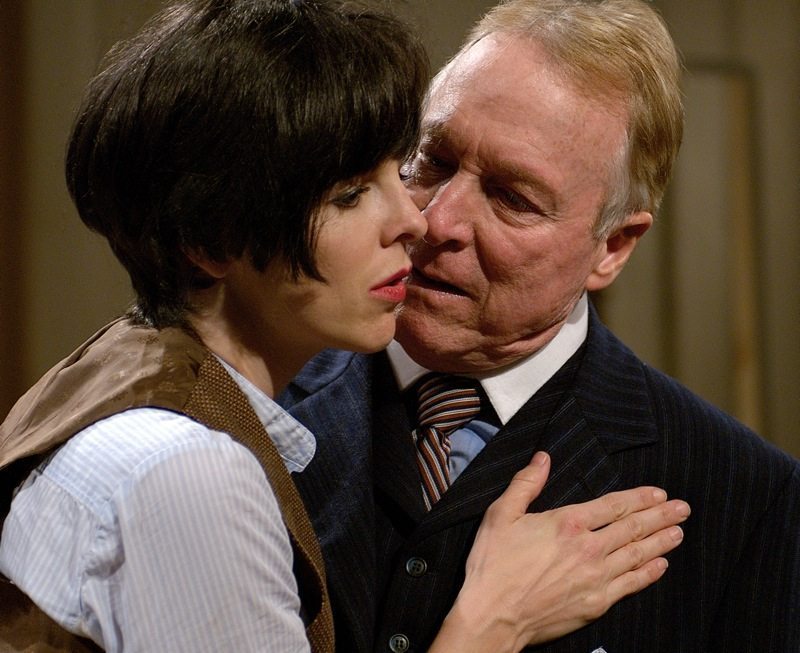 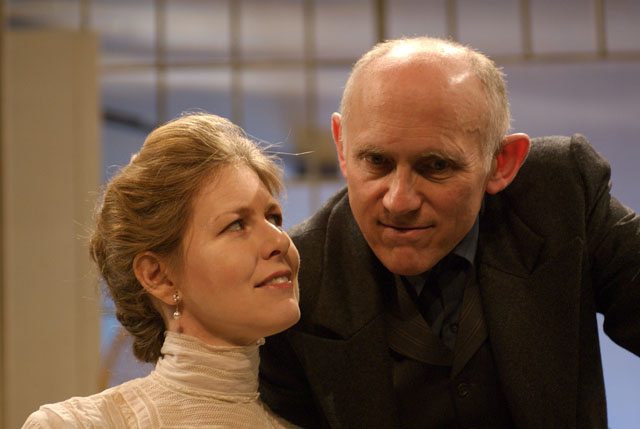 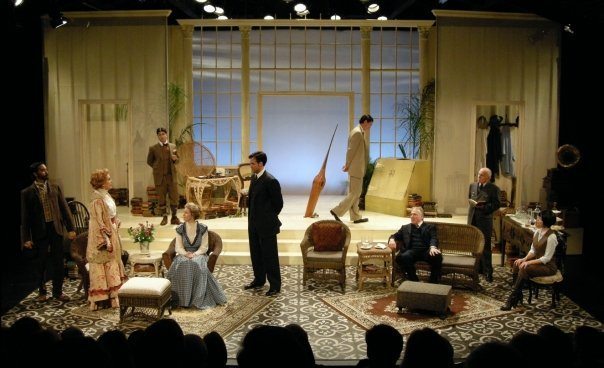 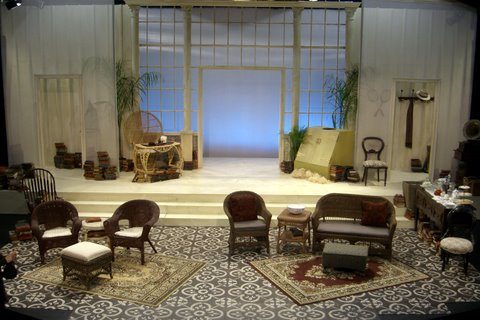 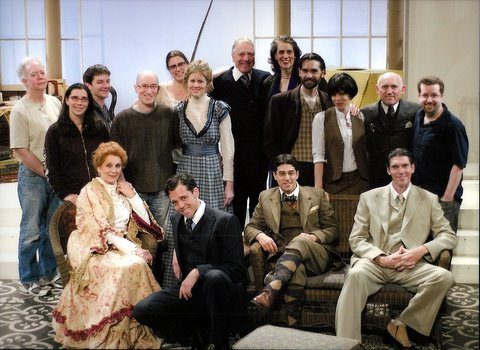 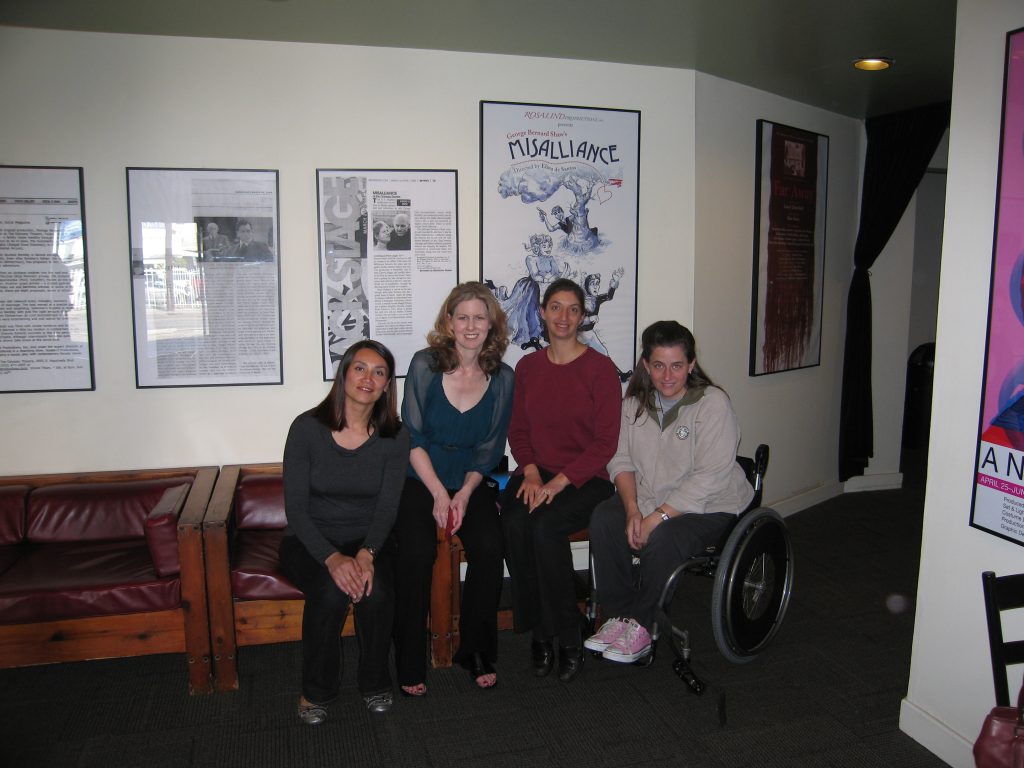 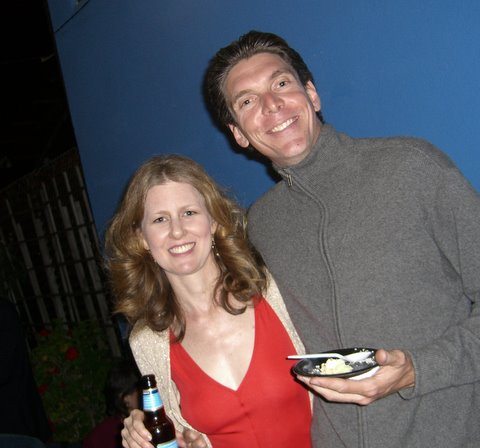 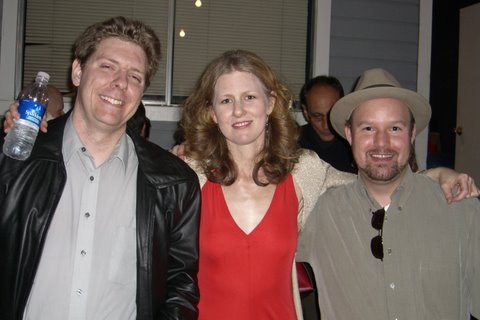 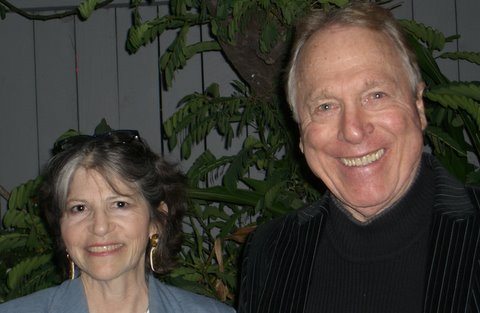 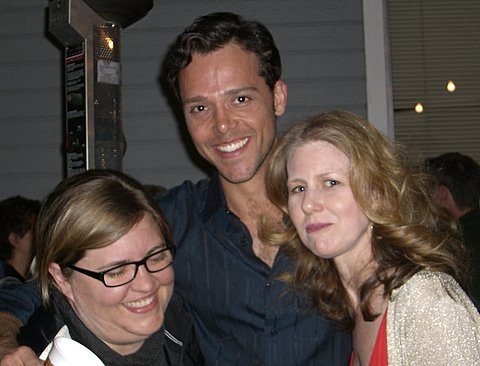 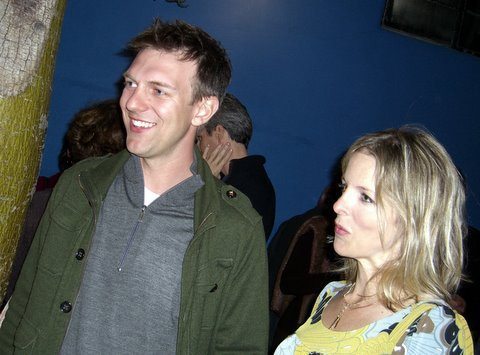 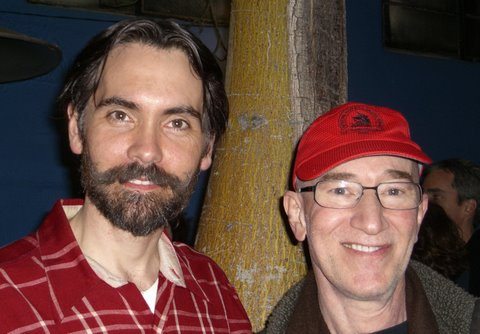 LA WEEKLY says GO! “Misalliance…really flies…Solomon’s captivating turn…she’s seconded in her charm by Maggie Peach, endearing as her wise, albeit mildly ditzy mother….Considerable humor, and it’s heightened further by the on-target performances of Mennell…and Schaffer…Delivering up more than our ticket’s worth of laughs.”
– LA WEEKLY

“George Bernard Shaw’s MISALLIANCE comes sparklingly alive in Rosalind Productions’ smashing revival of his 1910 comedy….explodes with passion and surprises…directed with style and verve by Elina de Santos, who has elicited vibrant performances from her entire cast….this is a Misalliance that looks like a million bucks….In a production as fine as this one, Misalliance is a sure bet to delight.”
– StageSceneLA.com

“MISALLIANCE at the Odyssey is clockwork-precise, strongly acted, and gets its share of laughs….vivacious Abigail Rose Solomon…Elina de Santos has directed Misalliance with an emphasis on excellent timing…Stephen Gifford’s stage set of a classy sitting room is detail perfect…the acting is consistently good…Greg Mullavey, still best-known for his stint on “Mary Hartman Mary Hartman,” does a wonderful turn…Peach is also excellent…Molly Schaffer is a scene-stealer and lights up the stage at all times….David Clayberg delivers a multi-layered performance…Misalliance is a jolly good evening of fun.”
– Stagehappenings.com  CLICK HERE for full review.

“The cast moved at a precise pace, keeping the scenes lively and surprising…. All the actors were entertaining and well suited for their roles… Under the expert direction of Elina de Santos, Misalliance is a charming show. Rosalind Productions, Inc. succeeds in staging a classic play with contemporary female issues.”
– SoCal Magazine

“It’s quite astonishing how fun, funny, witty and clever MISALLIANCE, considering George Bernard Shaw wrote this play in 1909.  This amusing farce…is quite apropos and timely for Los Angeles 2009….MISALLIANCE is sure to bring a laugh a minute, with its eloquent diction, poetic soliloquies and charming banter and romps between the sexes.”
– Campus Circle CLICK HERE for full review.

“Shaw’s frothy MISALLIANCE is entertaining…Despite its venerable age, MISALLIANCE is a thoroughly modern play….Elina de Santos directs with a keen eye and keener ear…under De Santos’s glib direction, and with the assistance of dialogue coach Jeffrey Phillips, the dialogue trips liltingly off the tongues of this cast, who keep the pace careening madly from subplot to subplot….The lovely English garden conservatory set is by Stephen Gifford.”
– HubPages

“Although it’s at its near century mark, all of the wit and wisdom of playwright George Bernard Shaw still holds out….this production does boast a terrific repertory line up… MISALLIANCE is one of those plays that just get better with age!”
– Accessibly Live Off-Line